There are many action-adventure games out there, but none of them make the role-playing monster-slashing gameplay as fun as the Monster Hunter franchise does.

Although we have Monster Hunter Rise now, unfortunately, it’s limited to just one gaming console at a time and we won’t be seeing a PC release until an entire year. This means that Monster Hunter: World is still the most relevant entry in the franchise at the time, and a very large number of people still play it 3 years after its release.

As with any other game that has an active player base, people want to experience the game’s multiplayer and cooperative functionalities with their friends irrespective of what platforms they’re all playing on.

Cross-play multiplayer is undoubtedly one of the most demanded things in the video game community now due to how big online gaming has become because having to get the same platform just to play one game together sounds ridiculous in 2022.

Not only does having cross-platform multiplayer add lots of accessibility for the players, but it also increases the game’s traffic since people can encourage their friends to buy it too.

The big question comes up – does Monster Hunter: World have cross-platform multiplayer? Let’s take a look at the official facts and answer that question.

We’re going to answer the main question immediately – but let’s take a small moment to explain what cross-platform multiplayer is so that anyone unaware of these terminologies can understand too.

There are two variations to cross-based functionalities, which are known as cross-platform and cross-progression.

Cross-platform multiplayer is the more common type that gamers ask for and having it in a game essentially means that players are able to play the game online with their friends on any platform, rather than being limited to only one at a time.

Cross-progression on the other hand means that the game allows you to carry your progress between different platforms.

For example, you can transfer your saved files and account levels from a PC to a PlayStation 4 without needing to start the game over on the other device from the beginning. Sometimes, the game allows one thing and not the other – which is very normal as not every game that offers these capabilities has an unlimited version of them.

Despite the demand, though, most games still don’t offer cross-play multiplayer for the most part which is an unfortunate thing for gamers.

Either way, we have the elaboration out of the way – so let’s answer the original question right now!

Sadly, Monster Hunter: World does not have cross-platform multiplayer. You cannot play with anyone outside of the platform that you’re playing it on, even if you’re all up-to-date with the latest version of the game. Instead, you’re limited to playing the game on the same machine.

Since Monster Hunter: World is one of the best-selling games of its generation and is on several platforms such as PlayStation 4, Xbox One, and PC – it’s only natural that gamers want the capability of being able to play with their friends on all of these different platforms instead of having to buy whatever device that they own.

While some games offer cross-progression capabilities to some extent, that’s unfortunately not the case with Monster Hunter: World.

You can’t transfer your saved files between platforms whatsoever, so even if you get the game on a different platform to play it with your friends, you won’t be able to have the same statistics and progress.

Instead, you’ll have to start everything over from the scratch, which is an unreasonable amount of time sink due to how grindy the game is in general.

Fans expected the functionality to be added and requested it from Capcom, but since it has not been added to the game yet and we even have a sequel already – it’s certainly not happening anymore. Perhaps Monster Hunter: Rise will change things, but we have no confirmation at the moment.

That’s the answer to our question – Monster Hunter: World does not feature cross-platform multiplayer in any way, nor does it have cross-save capabilities. We hope that this guide was helpful for you, and we’re here to answer any questions that you might have.

And while you’re here, make sure to check some of our other helpful guides on the website! 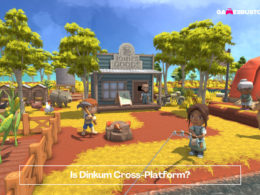 How Do Esports Players Prepare for a Pro Tournament?

The esports sector is in a great place at the moment. In 2022, market revenues exceeded $1.3 billion…