Monster Hunter is one of the biggest action role-playing franchises and one of the most profitable ventures of the industry giant Capcom – thanks to its amazing monster-slaying gameplay that has been coming out on almost every single platform since the very first release back in 2004.

One of the things the franchise is known for is the fact it crosses over with other franchises often, such as secret missions hidden within Metal Gear Solid: Peace Walker and characters like Dante from the Devil May Cry series showing up as a playable character – so it’s only natural that now it is crossing over with…itself.

With the live-action movie adaption just around the corner, the character played by actress Milla Jovovich is now being added into Monster Hunter: Iceborn as a playable character with complete likeness and voice acting. The trailer shows her in action as she fights a monster with her unique move-set and dual wielded swords, which are straight out of the movie footage that we’ve been shown so far.

The event is split into two parts and will have the players fight you the Black Diablos and Greater Rathalos creatures, and you will gain loot that is related to the movie as you play through. Milla Jovovich’s character, Artemis, will speak in fluent English while the other characters will still speak in the ‘Monster Hunter’ language as we have seen already in the short trailer.

So, in short, you will be able to play the collaboration in the limited-time single-player missions and then the loot you gain will carry onto everything else in the game as well, just like the other cross-overs the Monster Hunter series has had before.

If you’re unfamiliar with Milla Jovovich, you might recognize her from the live-action adaptions of the Resident Evil franchise in which she played the protagonist Alice. The movie series lasted for a total of 6 movies, and all of them were fairly successful in box office despite being panned by critics.

The Monster Hunter Movie crossover quest will be available on December 4, 2020 and the second part of it unlocks after you successfully complete the first half.

The movie itself is scheduled for release in the United Kingdom in December 4, while the United States will see a release later in December 25 under the Screen Gems label. The release dates, despite being official, should be taken with a grain of salt though – since the unpredictability of Covid-19 has caused many delays in the movie industry.

Don’t forget to leave your opinions on this reveal in the comments below, and while you’re here make sure to check out many of our other gaming news on the website!

Read next: 10 Best Electric Pokemon Characters to Use 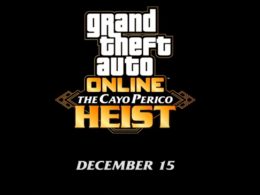 For a long time, Grand Theft Auto Online has consistently remained one of the most played games for…