In this guide, we’re going to show you some of the best mass effect 2 casual outfit mods to use in 2023.

There are two types of gamers when it comes to role-playing video games. Those who play the story, a few side missions, and then move on to the next game – and then we have those who try to do everything possible in the game and keep coming back for more.

Fortunately, this community has a large number of the latter and that’s why even in 2022 we still see some new mods for Mass Effect 2 every once in a while.

Whether you’re on your first playthrough and find the customization in the game lacking, or if you’re playing the game again and wish to have a bit more variety now – casual outfit mods are a great way to mix things up. Of course, due to just how many of those exist in general, it can be hard to look for the best ones.

That’s why we’ve created a list of the 10 best Mass Effect 2 Casual Outfit Mods for you so that you don’t have to look for them yourself! Let’s get started.

Sometimes, the sequel of a game does do some things better than what came before and that is the case with Mass Effect 3. People may disagree with some of its story and gameplay decisions, but its graphics and outfits were pretty cool, especially for the time.

This mod is essentially a backport that adds some of the Mass Effect 3 clothing and textures into Mass Effect 2, making the character models seem better and have higher resolution. Aside from the better faces for Asari, Liara, and better textures for the Sol System – this mod also adds a classy new dress that you can use for your female Shepard.

There are tons of other small touches, it would take a day to list them all – but one way or another, this is one of the best casual outfit mods that you can go for.

Miranda will obviously always remain one of the most iconic characters from the Mass Effect franchise – and we’ve always wanted to try out her outfit on the female Shepard ourselves.

This mod finally allows you to do that, as we have an ‘original’ and a ‘dark’ version to choose from which both look amazing and picking one just comes down to the preferences of the player.

Everyone loves Iron-Man – and so does the creator of this mod. The idea here is to replicate the Mark 42 armor as perfectly in Mass Effect 2 as possible. It’s not going to be entirely accurate, but that doesn’t change the fact that it looks really cool even if you don’t relate it to the Marvel character.

There are two variations that you can apply in this mod and it works on both male and female Shepard.

Mass Effect is all about the friends you make along the way, and that’s why Miranda isn’t the only well-known companion in the game. Vasir is pretty popular in the fan-base too so it’s only natural that her outfit is something we would all like to try on too.

With this mod – you can! It fits pretty well and has high-quality textures that make the suit stand out far more than the default female Shepard outfit.

You don’t always want to play as a human – and that’s why we have this mod. You can play as the alien Collector character instead of male or female Shepard, and the mod is made with great attention to detail so it feels as natural as the default model after a while.

The only catch is that going to other zones will reset the armor back to default, so you’ll have to reload the mod again from the in-game slider.

No list in 2021 would be complete without a little bit of humor, so we’re going to talk about this mod. It adds Sonic and Shadow the Hedgehog helmets in the game that not only fit the characters perfectly, but also increase the storm speed by 10%, and also the power or weapon damage based on the helmet.

If you’re familiar with the Sonic memes, you’ll be right at home with this one.

Christmas is a time of joy all over the world, and in that festive spirit, we present to you this mod. It gives you four unique Miranda Christmas outfits to choose from which are based on Santa, elves, and gingerbreads.

It has 4K resolution and it fits perfectly with other mods too as long as they still use the game’s original textures in reference – and there are still turnarounds if you have incompatible mods but it would require some time to tweak things around. But for four made-from-scratch skins – it’s worth the effort.

Sometimes, all we need is a little elegance in our lives. This mod allows you to use five unique recolors of the Asari Commando outfit which includes black, blue, purple, red, and Ursa white variations.

It can be used on female characters and can even be used on Shepard – so if you love black, this mod has you more than covered.

This mod provides 4K textures to replace the default outfits for the Quarians and not only does it make them higher in quality, they generally look more like their future variation too.

There are a few minor glitches due to the game not being natively compatible with 4K – but it’s a justified compromise considering the fact you get to experience such high-quality in general for the Quarian people.

What better way to end the list than to allow you to play as one of the fan-favorites of the Mass Effect franchise? This mod will let you change the appearance of your Shepard and play as Garrus instead – and it’s so well made that it looks like it’s something that is offered to the player officially.

The mod also has two versions of Garrus to play as, one has a damaged suit and the other one has a normal one – so there’s a bit of variation based on your mood and head-canons.

The only small issue here is that it will reset whenever you go into a new zone just like the Collector mode – so you’ll have to reselect it from the slider on the top right.

That’s it for our list of the 10 best Mass Effect 2 Casual Outfit Mods that you can use today. We hope that you found the mod best suited for you on the list, and we’re here to answer any questions that you might have regarding applying them in the comments below.

And while you’re here, don’t forget to check out some of our other helpful gaming guides too!

There are many excellent bow mods in Skyrim that you can use. Don’t get me wrong, The Elder… 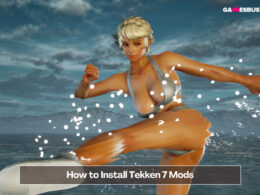