The Daeodon is one of the most useful creatures in Ark: Survival Evolved. They are a group of mammals who are carnivorous and very aggressive both before and after you have tamed them.

Whether you want to mount them or deploy them into direct combat, they are great creatures that can be rounded up in large numbers and taken into battle. And they work pretty well as part of strategies that involve other dinosaurs too.

As with any other creature in the game, it’s important to know what the Daeodon likes to eat, where they spawn, and how you can tame them.

It takes a while to figure these things out by yourself – but worry not. We’ve created a complete guide for the Daeodon in Ark: Survival Evolved, so all you need to do is to give it a read.

And in no time, you’ll know how to deal with this creature. So, let’s get started!

Let’s start off with the basics. You need to locate the creature before you can tame it, so let’s take a look at where you can find them.

According to player feedback, the Daeodon is most easily found on The Island map. You can find them in the West and in the South areas of the Western Coast to start off.

How to Tame a Daeodon in ARK: Survival Evolved

Once you have located a Daeodon and have worked out a strategy that keeps you safe from the rest of the pack – it’s time to tame them. Let’s take a look at the best way to tame Daeodons in Ark.

Step 1 – Choose your weapon of choice

Ingredients for the Tranquilizer Dart:

Ingredients for the Tranquilizer Arrow:

You can either try to aim and shoot at the Daeodons directly – or you can use something like the Bola to immobilize the Daeodon first. This will help you aim better, which is a great advantage for those with shaky hands.

Aiming for the Daeodon’s chin gives you extra damage and makes it easier to make them sleep.

Using raw food overcooked is always a better idea because it makes it easier to tame them. Cooked food spoils less often, but it takes longer to tame.

When they’re asleep, but the food in their inventory so that they eat them every time they feel hungry. And force-feed them Narcotics (Narcoberries work too) so that they remain asleep and don’t attack you. Once the taming bar is filled – they will become friendly.

Congratulations – your Daeodon is successfully tamed!

What does a Daeodon eat?

The Daeodon is a carnivorous creature in Ark. So, you need food that falls under that category.

As we already explained above, the Daeodon likes to eat:

Supporting With: How to Make Sweet Vegetable Cake In Ark: Survival Evolved

How to use Daeodon for combat in Ark (Daeodon Abilities)

Now that everything is done, you must want to make the Daeodon fight for you. After all, with their tough appearances, what else could you do?

The Daeodon is useful for many reasons. First of all, they have the ability to gather special resources in huge amounts such as Sap and Rare Mushrooms.

Secondly, they have great healing abilities that help them regenerate their health and also regenerate the health of tamed animals that surround them.

Lastly, they’re fairly decent at attacking your enemies too. But frankly, they are more of a support creature than something that should fight on the frontlines. So, it’s kind of an all-rounder creature with a focus on support over attacking. But should the situation arise, it can and will fight!

That’s it for our complete guide for the Daedon in Ark, which includes their spawning, what food they like, how you can tame them, and their battle strategy too! We hope that you found the guide useful and that it saved your time.

While you’re still here, make sure to check out some of our other helpful Ark: Survival Evolved guides too. 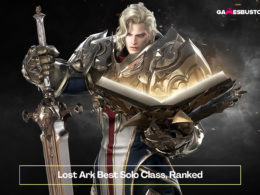