Sony has followed an “if it ain’t broke, don’t fix it” formula for many years since they perfected the design of the DualShock 2.

Although a few new features were added every time, such as the gyro sensors in the DualShock 3 and the touchpad in the DualShock 4 – they were hardly ever integral to the experience of what you’re playing.

That changed with the introduction of the DualSense, all thanks to the Adaptive Triggers that make you feel like you’re in the situation that is being experienced by your character in the game in creative ways.

Without going overboard, this little feature makes games even more immersive than before and that’s not even all, gaming on the PS5 can go as high as 120fps, select games.

Since not every PlayStation 5 game is making good use of this, we’ve taken the liberty of making a list to save your time – so here are the 10 best PS5 games that use Adaptive Triggers.

Ghost of Tsushima is a phenomenal game that beautifully captures the aesthetics and culture of feudal Japan. Whether it’s the combat, the graphics, the story, or the soundtrack – it’s one of the best games that Sony has to offer.

With the Director’s Cut, the game finally makes use of the Adaptive Triggers of DualSense, as players feel resistance while in certain situations from the buttons, and the pressure in which you press them makes a difference too.

Miles Morales is a character that had never been done justice until the release of Miles Morales on the PlayStation 4 and 5. On PS5, the game makes use of the adaptive triggers and it is used in clever ways, such as the feeling of resistance being emulated when you swing around the city.

The game makes use of other features too, such as vibrating when certain abilities are charged.

Demon’s Souls is a game meant for the hardcore and it would be a waste to overdo the addition of modern-day features for the sake of it.

Fortunately, the developers optimized both the adaptive triggers and haptic feedback to occur only when it would be fun, so the overall experience is as good as it has ever been.

Ratchet and Clank: Rift Apart is a great adventure that finally made the reboot series worth our time and money, since the first game was painfully average.

Although the shooting is already excellent in the game, the adaptive triggers make it even better since pressing it delicately or hard changes the function of what you have equipped.

Death Stranding is not a game that everyone likes, but one thing that couldn’t be denied about it was its realism. Adaptive triggers make it even more immersive, by making you feel the impact and importance of carrying deliveries that require precision and patience through resistance and other effects.

Astro’s Playroom is almost like a demo meant for DualSense, so it makes use of the adaptive triggers on every chance that it gets. For example, performing certain tasks or walking on different types of terrain all have a different feeling on the triggers.

Returnal is a roguelike that is not everyone’s cup of tea, but the adaptive triggers in the game are implemented beautifully. The intensity of how you press them and how much you push them in change how your weapon reacts to your commands.

No Man’s Sky may not be an exclusive, but it makes great use of the adaptive triggers based on what your current task is. For example, heating up a tool makes it provide resistance while flying ships give you a taste of the speeding engine.

Marvel’s Avengers may not have many things going for it as a game, but it’s pretty decent in terms of making the DualSense useful. Every playable character’s ability feels different on the adaptive triggers, making it feel like they’re not the same each time you play as them.

Control is a great adventure with a touch of mystery and psychological thrills tied to it. Although it was already a fun game, the use of adaptive triggers makes the experience better by making it feel like every form of your weapon operates differently.

We hope that you found this guide useful, and while you’re here, make sure to check out some of our other helpful PlayStation guides too!

Are you a fan of hunting games or hunting in real life? Would you love to experience the… 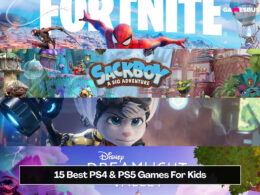