The Persona franchise has been existent for a long time, especially since it’s a spin-off of the Megami Tensei series – which is even older. But it wasn’t until Persona 5 that it caught the attention of a crowd that’s slightly more mainstream in the role-playing demographics.

With a beautiful rendition of Tokyo, gameplay mechanics that are a mixture of different genres, and solid dungeon-crawling gameplay with tons of different ways to play – Persona 5 is a complete package that continues to impress.

The Best Games Similar to Persona 5

Naturally, when something is that good, you want more of it. And that’s why we’ve created a coherent list of the 10 best games like Persona 5 for you so that you don’t have to look for them yourself! So, let’s get going.

Tokyo Xanadu is set in modern-day Tokyo and throws you into the life of high-school students who can travel to interdimensional dungeons. The writing of the game is incredible and has an extremely immersive story, and the story is split into chapters that allow some of the characters to receive extra development.

The plot is quite similar to Persona and the gameplay has the same role-playing elements that you would come to expect – which makes it a perfect substitute for Persona 5.

Dragon Quest XI is a squad-based RPG that is considered the best game in the franchise by many fans and critics alike. It has turn-based combat just like Persona 5 and features different worlds to explore which are all quite diverse and have many different types of enemies and bosses to fight.

The story is really fun to follow as well, although the simulation aspect is missing here. However, managing and evolving your party is still there and it even lets you switch between 2D and 3D graphics at any time that you want.

If you want to play the best games like Persona 5, why not start with the original series that it’s a spin-off of? Shin Megami Tensei III is the most recent ‘major’ installment in the franchise that wasn’t released on a handheld console.

It has every bit of the role-playing part of Persona 5 that you’d wish to see, but panders to even crowds that are more hardcore fans of the genre.

The simulation part of things is not present here, but there are other unique mechanics that make up for it. Such as the ability to negotiate with demons and make them join your party in order to have aid in combat. It’s an excellent game that every fan of the genre should try.

Available On: Wii U, Nintendo Switch.

Tokyo Mirage Sessions #FE is a crossover between Nintendo and Atlus in the sense that it mixes up the gameplay mechanics of the Shin Megami Tensei and Fire Emblem series – and provides an experience that satisfies fans of both of the franchises.

It’s set in the city of Tokyo and features teenagers fighting evil beings to save the world from having their energy stolen by a mysterious force known as ‘Mirages’. While the premise and setting are quite similar to Persona 5 – it features combat that works very similarly to it, too.

Fire Emblem: Three Houses is very similar to the Persona series. It is set within a high-school environment in which you can play as either a male or a female character based on your preferences.

It’s a nice touch that you’re a professor in this game instead of a student – but the goal is still to recruit party members for your team and then you can take them into battle. The gameplay is very much like Persona 5 in many ways and you can even romance a lot of the characters.

The Banner Saga is a solid RPG that features tactical squad-based gameplay. You are given a lot of different characters to play as based on your preferences and the choices that you make within the storyline greatly changes the outcome of everything that comes after it – so you can constantly replay it and not get bored at all.

One of the things that set it apart from almost every other RPG game is that not only do your choices affect the story – so do your battles and the outcomes of the bigger fights. And if all of that wasn’t enough, the game’s art-style is beautiful to look at too.

7. The Legend of Heroes: Trails of Cold Steel Series

The Legend of Heroes: Trails of Cold Steel is the start of a new trilogy within the long running series – so you don’t have to worry about skipping the games that came out before it. You start off in a military academy and it features the same simulation elements where you manage your student life and relationships from Persona 5 is present here.

The storyline is pretty good too and unlocking new abilities to use in the combat sections by furthering your friendships and bonds with fellow students is a satisfying experience.

Octopath Traveler is a gorgeous role-playing 2D video game with high quality graphics that are nothing short of eye-candy. You can pick from different characters to start your adventure with and all of them follow a unique path – and there’s also another option of creating a party of all of the characters together instead of playing them solo.

The storyline is one of the best that games in this genre have seen and the gameplay mechanics are very similarly turn-based as well. It’s a great game that should be given a chance by those who like relaxing adventures with a lot of tactical depth in the action.

Etrian Odyssey is a role-playing squad-based game that is known for its fun gameplay and challenging difficulty. One of the best things about it is the fact it offers a great deal of customization – as you can create your own party members and play through the story as those characters.

However, pre-made characters are available as well for those who don’t want to go through the effort! It’s one of the best dungeon-crawler games out there and features gameplay similar to Persona 5.

Whether you’re a fan of the RPG genre or not, you must have certainly heard of this game. Xenoblade Chronicles is one of the best Japanese role-playing video games of all time and is known for having one of the most gripping stories in the genre.

Many of the elements from Persona 5 that you know and love are here, such as turn-based combat that has a lot of depth and squad-based mechanics that allow you to bond with your party members in order to increase the team synergy. With the recent remaster, the game has improved even further and its aesthetic open-world is a delight to look at!

We hope that you found the best Persona 5 alternative for your gaming needs on this list and we’d love to hear from you about any important games that we may have missed out on. While you’re still around, don’t forget to check out some of our other helpful lists as well! 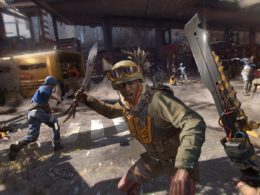 Looking for co-op games on PS5 to play with friends and family? This list is for you. As…

Zombie video games have been around for a very long time but after a while, the market became…

When it comes to the realm of realistic dating games, Summertime Saga takes the cake as one of…