When it comes to Souls games, difficult bosses are never a rarity. But when it comes to Elden Ring, many fans argue that the challenge has been kicked up a notch.

When you get around to fighting Malenia, you’ll realize that it’s by far one of the hardest fights in the game. If you fight her too soon or without the right preparations, you’ll lose easily because she has many tools at her disposal. That, and she has two phases too!

People who want to avoid her are in luck because she’s an optional boss. However, she’s one of the best bosses in the game and she drops a Great Rune and an important item called the Remembrance of the Rot Goddess. Therefore, it’s more than worth your time to fight her.

So, what do you need to know before you fight her? What’s the best strategy? What items should you use? Let’s get started with our guide on how to defeat Malenia in Elden Ring and find out!

Let’s take a look at where you can find the boss and in what ways you can beat her without too much difficulty.

Where to find Malenia boss fight in Elden Ring

First of all, you need to make sure that you have two items before you can look for Malenia. You need two halves of the Haligtree medallion, which can be found in the Village of the Albinaurics and Castle Sol respectively.

Then, you have to go to the Grand Lift of Rold and use the medallions there to unlock the next area. Then, make your way to the bottom of Elphael, Brace of the Haligtree and she can be found immediately below the stairs of the Haligtree Roots site of grace.

How to fight Malenia in Elden Ring

The first thing that you need to decide for this fight is whether you want to use one of the Spirit Ashes, or summon a real player through the game’s co-op capabilities. Once you’ve decided that, you can prepare that option and then go forth into the fight.

In the first phase of the fight, she mostly uses ranged attacks that have a lot of AoE (area of effect) damage. For example, she has a leaping sword dash and multiple sweeping sword attacks that the player has to dodge.

Another ability that the player needs to know about is that she can heal herself every time she hits the player. Even if you block the attack, she still manages to heal herself. So, it’s very important for the player to be good at dodging.

As soon as the fight starts, the player can either get assistance from their co-op partner or use one of the Spirit Ashes. We recommend using Mimic Tear since it essentially gives you a doppelganger that fights with you.

When the fight begins, there are no secrets to follow. You have to use your best attacks, block in the most effective ways that you can, and dodge every single attack if possible.

If you’re not able to deal as much damage as you’d like to, Bleed effect is your friend. Apply some Bleed-based Ashes of War to your weapon, or use an overpowered weapon like Ghiza’s Wheel that has the Bleed effect implemented already.

If you do everything right, the first phase will be close to its end. Simply keep attacking, dodging, and making use of Bleed/elemental effects until you win the first phase of the fight.

Keep in mind that alternatively to Bleed damage, Frost works against her pretty well too. Something like the Hoarfrost Stomp Ash of War is perfect and can both stagger her and deliver Frost damage along the way.

The very first thing that happens as soon as Malenia enters the second phase of her boss fight is that she unleashes an AoE attack. So, you should immediately try to get out of the radius of her attack to avoid it.

After that, you will learn that there isn’t too much of a difference between the phases in terms of how you should attack her. Given that your co-op partner or Spirit Ash is still alive, you can keep dealing double the damage.

And you can try to use them as a distraction to make it simpler for yourself to avoid attacks too. But if they’re dead by this point, you’re still going to be fine as long as your weapon deals enough damage and you are good at dodging.

One of the most important things to note about Malenia’s phase two is that her attacks deal Scarlet Rot damage. So, if you were not trying too hard to dodge in the first phase – you certainly need to change that this time around.

Fortunately, it’s not difficult to cure yourself if you do get attacked with Scarlet Rot, and having some boluses in your inventory will do you a lot of good.

Keep this strategy up and sooner or later, you’ll be able to defeat her for good.

So, what do you get by defeating her aside from self-satisfaction? Once defeated, Malenia drops a useful Rune and the Remembrance of the Rot Goddess which can be traded later for 50,000 Runes.

You can also trade the Remembrance of the Rot Goddess for either the Hand of Malenia or Scarlet Aeonia weapons. All that you need to do is to hand the consumable item to Enia in Roundtable Hold.

And that’s it for our complete Malenia guide in Elden Ring! Where to find her, how to fight her, and what you gain afterward.

We hope that you found it useful and while you’re here, don’t forget to check out some of our other helpful Elden Ring guides too! 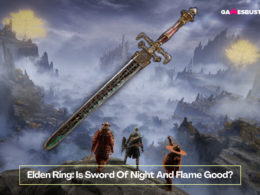